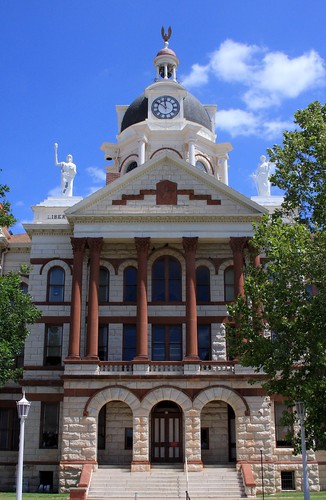 James Coryell was born in Ohio in 1803. At the age of eighteen, in search of adventure and a life of his own, James found himself in Texas and in the company of two brothers, Rezin and James Bowie, searching for legendary lost mines of silver in the San Saba area. He later moved near present day Marlin (Falls County), joined Sterling Robertson’s company of Texas Rangers and claimed his land grant near Coryell Creek in present day Coryell County. He met an untimely death in 1837 near the Brazos River falls (Falls County) where he was shot and killed by Indians while taking honey from a bee tree with his Texas Ranger company. In 1854 the county of Coryell was established and named in his honor.

The grandson of an American Revolution veteran and the son of a War of 1812 veteran, Major Collinson Reed Gates distinguished himself in the Mexican War at Palo Alto and Resaca de la Palma. He died at Fort Martin Scott in Fredericksburg during a cholera epidemic in 1849 at the age of 33. In October of that year the U.S. Army established an outpost as a line of defense against Indians on the western frontier. They named it Fort Gates in his honor. In 1854, when Coryell County was formed, a county seat was established near the fort and named Gatesville.

In 1942, Fort Hood (named for John Bell Hood, a United States and Confederate States Army Officer) was established as a tank destroyer tactical and firing center in Coryell and Bell counties. During World War II, 100,000 soldiers trained and 4,000 German prisoners of war were held at Fort Hood. Today it is one of the largest military installations in the world.

In 1921, Mother Neff State Park, the first official state park in Texas, was created from land donated by the mother of Governor Pat M. Neff.

Completed in 1898, at a cost of $73,649.69, the Coryell County courthouse is constructed of native limestone and Pecos Sandstone. When the courthouse was built the main street of Gatesville was to the south, and so the main entrance was placed facing that direction. Over the years, however, the main street shifted to the north side of the building causing the less dominant entrance to be a focal point of the square. This is definatley one of my favorites so far. The photo on the upper right is of the skylight as it is seen looking up to through the cupola from inside of the courthouse.