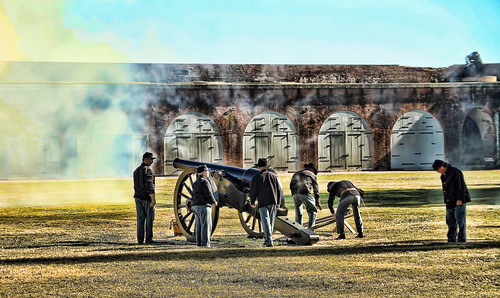 Fort Pulaski
County:Chatham
City:Savannah
Type:National Park, Fort, Battlefield
Cockspur Island has been important to coastal defenses since James Oglethorpe first settled the colony. Two earlier forts, Fort George and Fort Greene had been built on the island. In 1830, as part of the Third System, construction began on a state-of-the-art fort for the defense of the coastal United States.

Construction was completed in 1846. By that time America was nation building in Mexico and had little interest (or money) for the edifice. On January 3, 1861, when a band of Confederate soldiers occupied the fort, only two people were stationed there.
One of the first actively targeted sites by the Union Army and Navy, the assault on Pulaski began with troops occupying Tybee Island on November 24, 1861. On April 10th, 1862, shortly after 8:00 a.m., Federal forces opened fire with rifled cannon and mortar, systematically breaching the wall. By noon the following day, Union troops were preparing an assault on the breached wall of Fort Pulaski. The Rebels surrendered. (For complete details on the fighting that occurred here, see Lt. Col. Samuel Taylor’s excellent in-depth piece, Fort Pulaski)

Towards the end of the war a group of Confederate prisoners of war were housed in the fort under deplorable conditions. Known as the "Immortal 600" these men survived in spite of starvation rations and brutality. Some of these men remained in Pulaski until March, 1865.