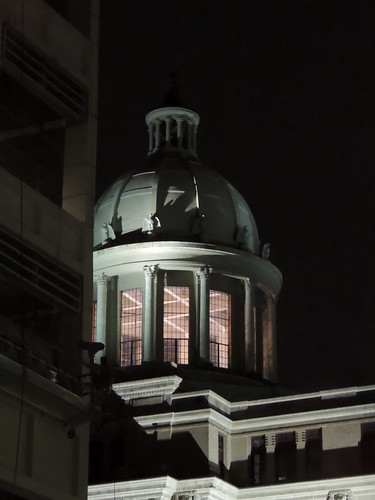 A lovely sight at night in the older part of Downtown Houston is the newly refurbished 1910 Harris County Courthouse. On August 23, 2011, Harris County officials, historians, downtown office workers and local citizens gathered for the dedication and ribbon cutting for the grand re-opening of the historic 1910 Harris County Courthouse in downtown Houston located at 1201 Franklin St. The courthouse square was designated by the Allen Brothers when the city was 1st platted in 1837. Harris County officials at the time wanted a large, grand structure, significant of the county’s importance in Texas. Plans to build a 5th courthouse were underway in 1907. Construction began in 1909 & was completed by late 1910, but the courthouse was not dedicated until March 2, 1911 in observance of the 75th anniversary of "Texas Independence". The courthouse was designed by Charles Erwin Barglebaugh of the Dallas architectural firm of Lang & Witchell, who had designed courthouses for Howard, Nacogdoches, Scurry, Cooke and Johnson counties in Texas around the same time. The $500,000 Beaux-Arts style (also referred to as Neo-Classical Revival) six-story courthouse was built primarily of rough-cut pink Texas granite, light brown St. Louis pressed brick with terra-cotta, limestone, & masonry ornamentation. Each side consisted of raised, projecting porticoes with Corinthian columns and the building was crowned with a central dome with supporting columns around the drum and a ring of eagles around the base of the dome. The top had a Doric lantern with a cap that looked like a chess pawn. The lantern cap was removed not long afterwards. The courthouse opened in 1910 on the same site of the 1884 courthouse which was demolished earlier due to being too small. Designed in the popular Beaux-Arts style, the Beaux-Arts style heavily influenced the architecture of the United States in the period from 1880 to 1920. Beaux-Arts architecture; French: [bozaʁ]) expresses the academic neoclassical architectural style taught at the École des Beaux-Arts in Paris. Houston’s 1910 courthouse featured Corinthian columns on all four sides. At the front entrance was a grand monumental staircase, and the interior public area featured a large rotunda and circular staircase. Built of Texas pink granite & light brown St. Louis brick, with extensive use of marble inside. Over the years Harris County outgrew this building and larger structures nearby began to house county offices and district courts. Drinking troughs for horses on the San Jacinto Street side were removed in 1941, and in 1954 the historic courthouse underwent extensive alterations in an effort to modernize it. The grand staircase at the Fannin Street entrance was demolished, inside the atrium was eliminated & covered up to add more usable square footage. The courtrooms were downsized and balconies eliminated. By 2000 the building was in need of major renovation and upgrading. Harris County decided to completely restore the beloved building to its original appearance & make it a landmark for the historic area of downtown Houston. The false floors were removed & the atrium was restored with a beautiful stained glass window lit by sunlight from the building’s dome & skylight. The pinnacle was replaced on top of the dome ("The building’s original lantern cap was removed in the 1920’s, this 15 foot, $54,000 copper replica was built in 1993 for an earlier preservation effort. It was finally installed on top of the dome on March 14, 2010.") and the courtroom balconies restored. The ornamental plaster detailing has been carefully redone & all the marble, which came from a Georgia quarry, has been replaced in the lobby and hallways. The old courthouse seems to glow with a sense of pride and dignity in its historic role as a “temple of justice”. The historic 1910 Harris County Courthouse, which saw some of the most colorful criminal trials & major civil lawsuits in Texas, will now house the 1st and 14th Courts of Appeals. (Texas Foundation for the Arts, in association with Sunset Productions and Fast Cut Films, produced a PBS television documentary about the history and the restoration of the 1910 Harris County Courthouse).
See: www.discovertexashistory.com/historic-harris-county-court… and texasescapes.com/Houston/HarrisCountyCourthouseHoustonTex…