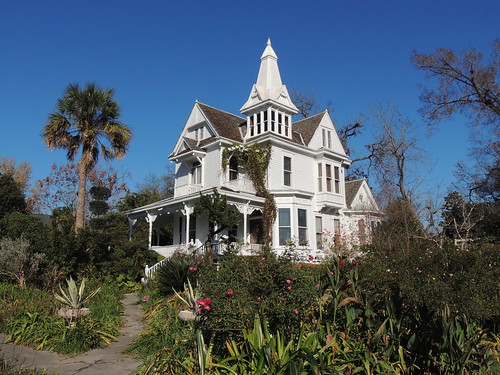 The Mansfield House of the Houston Heights is located at 1802 Harvard and was built by George Franklin Barber of Knoxville, TN in 1896. This home is a CS2 — Design found in Barber’s The Cottage Souvenir No. 2 (1891). As he wrote in his Cottage Souvenir No. 2, "Write to us concerning any changes wanted in plans, and keep writing till you get what you want. Don’t be afraid of writing too often. We are not easily offended. It truly is a gem and I delight in driving by and taking photos of this lovely home and it’s gardens. The “Victorian Era” lasted from 1837 to 1901. Many Victorian-era buildings were decorated with elaborate details. They were designed to imitate the architecture of Gothic cathedrals. In America, this was called the Queen Anne style. Queen Anne houses are easy to identify by both form and style. They were relatively large and had irregular shapes, high-pitched roofs, and prominent porches. They could be one or two stories tall. Some houses in Houston Heights were built from designs published in pattern books. The two main pattern book publishers were Jacob Daverman, an architect in Grand Rapids, Michigan, and George Barber of Knoxville, Tennessee. Barber would customize his designs for each client. Several dozen homes in Houston Heights were built from Barber’s designs or adapted by local builders from his patterns. Those still standing include the Mansfield House (1802 Harvard) and the Milroy House and carriage house (1102 Heights Boulevard). George Franklin Barber (July 31, 1854 – February 17, 1915) was an American architect best known for his residential designs, which he marketed worldwide through a series of mail-order catalogs. One of the most successful domestic architects of the late Victorian period in the United States, Barber’s plans were used for houses in all 50 U.S. states, and in nations as far away as Japan and the Philippines. Over four dozen Barber houses are individually listed on the National Register of Historic Places, and several dozen more are listed as part of historic districts.Barber began designing houses in his native DeKalb, Illinois, in the late 1880s, before permanently moving his base to Knoxville, Tennessee, in 1888. His first widely circulated catalog, Cottage Souvenir No. 2, contained designs and floor plans for fifty-nine houses, mostly in the Queen Anne style, as well as Barber’s architectural philosophy and tips for homebuilders. Later catalogs contained more Colonial designs. By the time his catalog business ended in 1908, Barber had sold upwards of 20,000 plans. Another interesting note that in 1884, Barber patented a nail-holding attachment for hammers.
See: www.fampeople.com/cat-george-franklin-barber and www.houstontx.gov/planning/HistoricPres/HistoricPreservat…
and en.wikipedia.org/wiki/George_Franklin_Barber
and en.wikipedia.org/wiki/List_of_George_Franklin_Barber_works