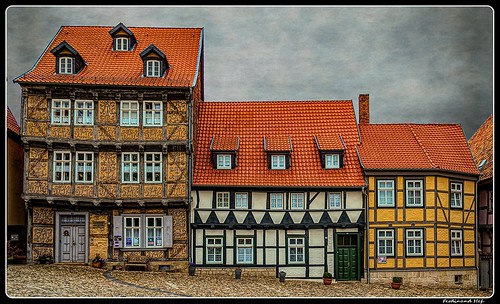 Quedlinburg is a town situated just north of the Harz mountains, in the district of Harz in the west of Saxony-Anhalt, Germany. In 1994, the castle, church and old town were added to the UNESCO World Heritage List.

Quedlinburg has a population of more than 24,000. The town was the capital of the district of Quedlinburg until 2007, when the district was dissolved. Several locations in the town are designated stops along a scenic holiday route, the Romanesque Road.

The town of Quedlinburg is known to have existed since at least the early 9th century, when there was a settlement known as Gross Orden on the eastern bank of the River Bode. It was first mentioned as a town in 922 as part of a donation by King Henry the Fowler (Heinrich der Vogler). The records of this donation were held by the abbey of Corvey.

According to legend, Henry had been offered the German crown at Quedlinburg in 919 by Franconian nobles, giving rise to the town being called the "cradle of the German Reich".[2]:85

After Henry’s death in 936, his widow Saint Matilda founded a religious community for women (Frauenstift) on the castle hill, where daughters of the higher nobility were educated. The main task of this collegiate foundation, Quedlinburg Abbey, was to pray for the memory of King Henry and the rulers who came after him. The Annals of Quedlinburg were also compiled there. The first abbess was Matilda, a granddaughter of King Henry and St. Matilda.

The Quedlinburg castle complex, founded by King Henry I and built up by Emperor Otto I in 936, was an imperial Pfalz of the Saxon emperors. The Pfalz, including the male convent, was in the valley, where today the Roman Catholic Church of St. Wiperti is situated, while the women’s convent was located on the castle hill.

In 973, shortly before the death of Emperor Otto I, a Reichstag (Imperial Convention) was held at the imperial court in which Mieszko, duke of Polans, and Boleslav, duke of Bohemia, as well as numerous other nobles from as far away as Byzantium and Bulgaria, gathered to pay homage to the emperor. On the occasion, Otto the Great introduced his new daughter-in-law Theophanu, a Byzantine princess whose marriage to Otto II brought hope for recognition and continued peace between the rulers of the Eastern and Western empires.

In 994, Otto III granted the right of market, tax, and coining, and established the first market place to the north of the castle hill.

The town became a member of the Hanseatic League in 1426. Quedlinburg Abbey frequently disputed the independence of the town, which sought the aid of the Bishopric of Halberstadt. In 1477, Abbess Hedwig, aided by her brothers Ernest and Albert, broke the resistance of the town and expelled the bishop’s forces. Quedlinburg was forced to leave the Hanseatic League and was subsequently protected by the Electorate of Saxony. Both town and abbey converted to Lutheranism in 1539 during the Protestant Reformation.

In 1697, Elector Frederick Augustus I of Saxony sold his rights to Quedlinburg to Elector Frederick III of Brandenburg for 240,000 thalers. Quedlinburg Abbey contested Brandenburg-Prussia’s claims throughout the 18th century, however. The abbey was secularized in 1802 during the German Mediatisation, and Quedlinburg passed to the Kingdom of Prussia as part of the Principality of Quedlinburg. Part of the Napoleonic Kingdom of Westphalia from 1807–13, it was included within the new Prussian Province of Saxony in 1815. In all this time, ladies ruled Quedlinburg as abbesses without "taking the veil"; they were free to marry. The last of these ladies was a Swedish princess, an early fighter for women’s rights, Sofia Albertina.

During the Nazi regime, the memory of Henry I became a sort of cult, as Heinrich Himmler saw himself as the reincarnation of the "most German of all German" rulers. The collegiate church and castle were to be turned into a shrine for Nazi Germany. The Nazi Party tried to create a new religion. The cathedral was closed from 1938 and during the war. The local crematory was kept busy burning the victims of the Langenstein-Zwieberge concentration camp. Georg Ay was local party chief from 1931 until the end of the war. Liberation in 1945 brought back the Protestant bishop and the church bells, and the Nazi-style eagle was taken down from the tower.

During the last months of World War II, the United States military had occupied Quedlinburg. In the 1980s, upon the death of one of the US military men, the theft of medieval art from Quedlinburg came to light.

Quedlinburg was administered within Bezirk Halle while part of the Communist East Germany from 1949 to 1990. It became part of the state of Saxony-Anhalt upon German reunification in 1990.

During Quedlinburg’s Communist era, restoration specialists from Poland were called in during the 1980s to carry out repairs on the old architecture. Today, Quedlinburg is a center of restoration of Fachwerk houses.