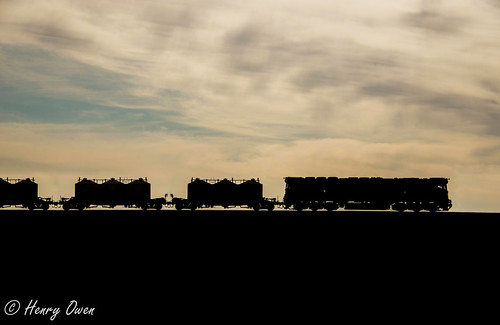 Cruising away from Meredith as 9157, G528 solo hauls 8 loaded cement hoppers North to Mildura where they will unload for the final time.

9157 was operated as an ‘extra’ service to Mildura as 9101/2 had not been operating back as 9102 Sunday Night/Monday Mornings and as 9101 on Monday Nights/Tuesday Morning for the past 3 weeks due to a decrease in loading. The container train had been stabled in Merbein from Saturday morning till Tuesday night.

This was the last cement train to operate from North Geelong to Mildura in physical cement hoppers. The hoppers then returned Thursday Night/Friday Morning to Gheringhap empty. This service will now be carted in containers from Appleton Dock.

The Waurn Ponds – Somerton cement train remains as the last movement of cement hoppers, however this will cease on Wednesday 23rd December 2015.