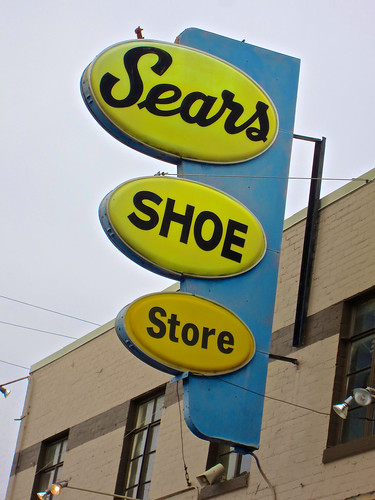 Sear’s Shoe Store, 2778 Lafayette Road, Fort Oglethorpe, Georgia. Jerry Sear is the third generation of his family operating a shoe business. Mr. Sear’s grandfather, Solomon Sir, immigrated to the United States from Poland in the 1930s and opened a shoe repair shop in Chattanooga, Tennessee, on 9th Street. Later he moved to Main Street where he ran his shop the rest of his life. Solomon’s son, Harry, joined the United States Army as Private Harry Sir. The army at that time did not take smoothly to calling a private "Sir," and Harry chose to legally change his name to "Sear." After his service, he followed the family tradition of business ownership and opened a dry goods store on 9th Street, where his wife, Ray, worked by his side. They eventually moved the store to Market Street, where Jack’s Alley is now, and then to Main Street. Harry and Ray also brought a child into the world — Jerry Sear, who, after finishing college, joined the family business. Around 1959, the family moved their dry goods store to Lafayette, Georgia. Ray ran that store and Harry opened a shoe store nearby. In 1967, the family decided to go out of the dry goods business. They moved their shoe store to Ft. Oglethorpe, Georgia, where it stands today, one of the oldest operating businesses in the city and an icon among shoe stores in the region. Year after year, Sears wins the Chattanooga Times Free Press Readers’ Choice Award for Best Shoe Store in both the Chattanooga/Hamilton County area and the Northwest Georgia region.

Jerry Sear has expanded the store to carry over 250 brands of shoes, as well as a wide variety of accessories. He employs over 20 people in the various departments of his store. Sears Shoe Store is unique not only because of the thousands upon thousands of shoes you can find there, but also because it’s just plain funky. In an era of modern shelving, Sears sports lots of old-time wooden shelves. You will still find, along with all the latest trends in footwear, 60s-era (and older) signs hanging from the ceilings. The feel of the store is tight old-city instead of spacey suburban. Shopping in Sears is like going on a treasure hunt — the more you look the more surprises you find. Sears is all about shoes, everywhere your eye falls — wall-to-wall, floor-to-ceiling.