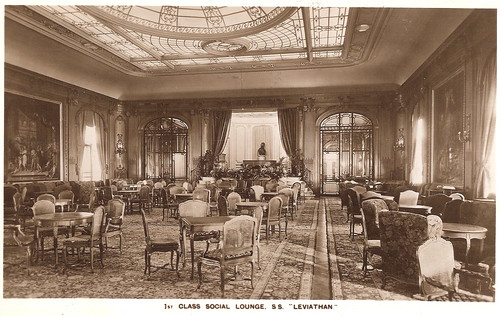 A postcard published by the Ocean Trading Co. of Southampton. The image is a glossy real photograph.

The card was posted at sea at the U.S. Sea Post Office No. 10 on Thursday the 21st. June 1928. The postmark includes the name of the ship, and the card bears an American 2 cents stamp.

The card was posted to:

The message on the divided back of the card was as follows:

"At Sea. May 31st.
This is a fine time to think
of answering your good
letter isn’t it?
I hope to see you soon
and perhaps you will
forgive me.
Kindest regards to all at
St. Margarets.
Pearl".

At the beginning of the 20th. century many of the major shipping lines took advantage of the craze for picture postcards.

By selling on board each vessel postcards of the ship, it not only gave the passenger a way of communicating with families etc., but it also allowed the company to advertise their shipping lines by showing just how attractive a particular ship was.

Holland Amerika (Netherlands) was among the first, while P&O, Cunard (GB) and Hamburg Amerika (Germany) were to follow.

From the very late nineteenth century, certain countries with large merchant fleets began to install official post offices on some of their flagged ships. These were run, staffed and paid for by their respective governments.

The leading exponents of this procedure were France and Germany, with the USA, New Zealand, Japan and Italy as runners-up. Great Britain had sea post offices on board ships crossing the North Atlantic belonging to the White Star Line.

SS Leviathan, originally built as Vaterland (meaning ‘Fatherland’ in German), was an ocean liner which regularly crossed the North Atlantic from 1914 to 1934.

The second of three sister ships built for Germany’s Hamburg America Line for their transatlantic passenger service, she sailed as Vaterland for less than a year before her early career was halted by the start of the Great War.

In 1917, she was seized by the U.S. government and renamed the Leviathan. She would become known by this name for the majority of her career, both as a troopship during the Great War and later as the flagship of the United States Lines.

Construction and Early Career of the Leviathan

SS Vaterland, a 54,282 gross ton passenger liner, was built by Blohm & Voss in Hamburg for the Hamburg-America Line’s trans-Atlantic route. She was launched on the 3rd. April 1913, and was the largest passenger ship in the world upon her completion.

Vaterland had made only a few trips when, in late July 1914, she arrived at New York City just as World War I broke out. With a safe return to Germany rendered questionable by British dominance of the seas, she was laid up at her Hoboken, NJ, terminal and remained immobile for nearly three years.

The Leviathan in the Great War

The Leviathan was seized by the United States Shipping Board when the United States entered the Great War on the 6th. April 1917. She was turned over to the custody of the U.S. Navy in June 1917, and her German crew was sent to a new internment camp in Hot Springs, NC.

Many of these men later died of a typhoid fever outbreak in the summer of 1918 as they were about to be transferred to Fort Oglethorpe, GA.

She was commissioned in July 1917 as the USS Vaterland, with Captain Joseph Oman in command. On the 6th. September 1917 she was renamed Leviathan by President Woodrow Wilson.

A trial cruise to Cuba on the 17th. November 1917 prompted Captain Oman to order 241 Marines on board to station themselves conspicuously about the upper decks, giving the appearance from shore that the great ship was headed overseas to increase American Expeditionary Forces.

Upon her return later that month, she took troops to Liverpool, England, but repairs delayed her return to the U.S. until mid-February 1918. A second trip to Liverpool in March was followed by more repairs.

At that time she was repainted with the British ‘dazzle’ camouflage that she carried for the rest of the war. With the completion of that work, Leviathan began regular passages between the U.S. and Brest, France, delivering up to 14,000 troops on each trip. Once experience in embarking troops was gained, 11,000 troops could board the ship in two hours.

Before the Armistice on the 11th. November 1918, the ship had transported over 119,000 fighting men. Amongst the ship’s US Navy crew during this period was future film star Humphrey Bogart.

After the Armistice, Leviathan, repainted grey, reversed the flow of men as she transported Great War survivors back to the United States with nine westward crossings ending on the 8th. September 1919.

On the 29th. October 1919, USS Leviathan was decommissioned and turned over to the U.S. Shipping Board and again laid up at Hoboken until plans for her future employment could be determined.

The Gibbs Brothers Inc. were hired to survey the vessel and to assess her economic potential. Their first big task was the creation of a new set of blueprints. None had been received from Germany under the Versailles Treaty. Accordingly an army of workers measured every part of the ship until a new set of prints had been made.

Having languished at her Hoboken pier until April 1922, $8,000,000 were allocated to sail Leviathan to Newport News Shipbuilding & Dry Dock Company in Newport News, Virginia, for reconditioning and refurbishment.

War duty and age meant that all wiring, plumbing, and interior layouts were stripped and redesigned, while her hull was strengthened and her engines converted from coal to oil; virtually a new ship emerged.

The Ritz-Carlton of Leviathan

Thanks in part to the Gibbs’ clever accounting and to the Gulf Stream, she was said to be the world’s largest and fastest ship, a claim that was immediately challenged by the Cunard Line who reminded them that their RMS Mauretania (1906) still held the official speed record for the trans-Atlantic crossing.

Furthermore the White Star Line claimed that the RMS Majestic was the world’s largest ship as it was longer, and its gross tonnage higher, because the Gibbs used a skewed formula.

By this time the United States Lines had been sold and were contractually obliged to run Leviathan for a minimum of five return voyages on the Atlantic run per year. The Gibbs Brothers ran the ship for her first voyages and trained the crew until ownership officially changed hands.

She immediately proved popular with the American public in the 20’s, starting her career fully booked for her maiden voyage on the 4th. July 1923. Her passenger average reached a strong 1,300 by 1926, making her the number 1 traveled ship on the Atlantic, but given her capacity of 3,000, it was still too little to be profitable.

Her economic problems lay primarily in high labour and fuel costs which were compounded by Prohibition – from 1920 all US registered ships counted as an extension of US territory, making them ‘dry ships’. With Atlantic shipping capacity over-saturated, especially after the Immigration Act of 1924, alcohol-seeking passengers readily chose other liners.

However the Leviathan was an American symbol of power and prestige, which despite her economic failings, made her a popular ship with loyal travelers. She attracted attention as the largest and fastest ship in the American merchant marine, and featured in countless advertisements.

The only serious incident occurred one day out of Cherbourg on a winter crossing in 1924 where she met a fierce storm with 90 ft waves and winds of up to 100 mph, at times forcing her into 20 degree rolls. Eleven portholes were smashed and 32 passengers injured by the time the storm abated.

The ship’s orchestra, the SS Leviathan Orchestra under the direction of Nelson Maples, was well regarded. Gramophone records were produced in 1923 and 1924 for Victor Records by the band, which would later become the inspiration for the New Leviathan Oriental Fox-Trot Orchestra decades later.

In 1929 Leviathan was finally allowed to serve ‘medicinal alcohol’ outside US territorial waters to make her more competitive with foreign lines, and was quickly sent on Booze Cruises to make money. However the Great Depression was the final nail in the coffin, and she was laid up at her pier in Hoboken in June 1933, having lost $75,000 per round trip since 1929.

Nevertheless the US government steadfastly stipulated that the Leviathan should sail, and she took to sea for a further five round trips. The first round trip sailed on the the 9th. June 1934, high season on the Atlantic, and tallied a loss of $143,000. By Leviathan’s fifth voyage she sailed at barely half capacity.

The End For the Leviathan

In 1937 she was finally sold to British Metal Industries Ltd. On the 26th. January 1938 Leviathan set out on her 301st. and last voyage with a crew of 125 officers and men who had been hired to deliver her to the breakers.

She arrived at Rosyth, Scotland, on the 14th. February. In the 13 years that she served U.S. Lines, she had carried more than a quarter of a million passengers, and never earned a cent.

So what else happened on the day that Pearl posted the card?

Well, the 21st. June 1928 marked the birth in Port of Spain, Trinidad of Mona Baptiste.

Mona was a singer and actress in London and Germany. She was largely popular from songs such as ‘Calypso Blues’ and ‘There’s Something in the Air’.

Mona also acted in multiple musical films, including ‘Dancing in the Sun’ (1954).