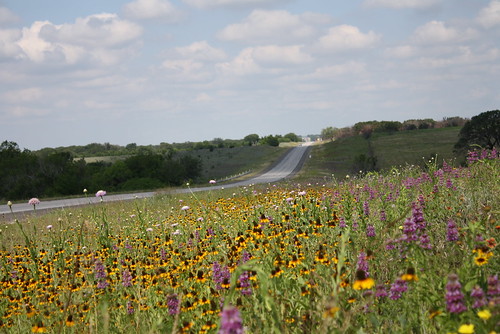 A Spring scene close to Center City, Texas. Center City, on U.S. Highway 84 north of Bennett Creek in eastern Mills County between Goldthwaite, TX and Gatesville, TX, was settled about 1870. When the county was organized, the town site was laid out with a large area in the center designated as the site for the new courthouse. Built around this square were various businesses, including several saloons, several dry goods stores, two blacksmith shops, a general store, and a drugstore. But Goldthwaite became the county seat. By 1874 Center City had a post office, a gristmill, and a school. After a survey in the early 1870s designated an ancient live oak standing in the town as the exact center of Texas, the name of the town, which had previously been Hughes Store, was changed to Center City. Controversy was to break out when the tree was later threatened with removal by construction of State Highway 7 (now U.S. 84). Citizens won out, and in 2003 the live oak was still standing fifty feet south of the highway in the middle of a dirt road between Goldthwaite and Evant. The tree is included in Famous Trees of Texas (1970, 1984). Although the tree’s exact age is unknown, early settlers were said to have held justice court under its branches until a courtroom could be erected. Early school and church services were held there also. By 1880 Center City had a church, and in 1885 the community reported a population of 100. In 1910 it had three churches. By 1920 Center City’s post office had been replaced by rural delivery from Goldthwaite. In the late 1940s Center City reported three stores and an estimated population of seventy-five. From 1970 through 2003 the community reported a population of fifteen. In 2003 Center City had two churches and a single business, a combination hardware store & gas station called Head’s Store & Service Station.

U.S. Route 84 (US 84) is an east–west United States highway. It started as a short Georgia-Alabama route in the original 1926 scheme, but now extends all the way to Colorado. The highway’s eastern terminus is a short distance east of Midway, Georgia, at an intersection with I-95. The road continues toward the nearby Atlantic Ocean as a county road. Its western terminus is in Pagosa Springs, Colorado, at an intersection with U.S. Route 160. The section from Brunswick, Georgia to Roscoe, Texas has been designated by five state legislatures as part of the El Camino East/West Corridor. The designation was in recognition of its history as a migration route from the Atlantic coast to the present U.S.-Mexico border, one of the routes that Spanish settlers called El Camino Real. (In Louisiana, the route was called the Harrisonburg Road.) The designation is intended to promote the route for both tourism and NAFTA-facilitated trade with Mexico. States are asking for Federal funds
to four-lane the US 84 El Camino East/West Corridor.