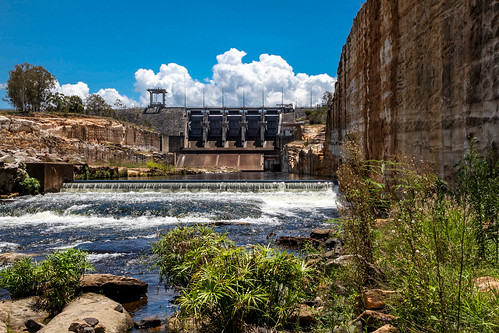 The Wivenhoe Dam is a rock and earth-fill embankment dam with a concrete spillway across the Brisbane River in South East Queensland, Australia. The dam wall is located about 80 kilometres (50 mi) by road from the centre of Brisbane. The primary purpose of the dam is the supply of potable water for the Brisbane and Ipswich regions. In addition, the dam also provides for flood mitigation control, hydroelectricity and for recreation.[1] The impounded reservoir is called Lake Wivenhoe and the dam, the lake and a narrow strip of surrounding land forms a locality also called Lake Wivenhoe.

Wivenhoe Dam was planned in the early 1970s as a flood mitigation and water storage dam. The 1974 Brisbane flood highlighted the need for flood protection for South East Queensland.[2] The lake also forms part of the water storages for the Wivenhoe Power Station.